Back to profile for: Henry-II VW T2 Classic campervan in London,

We had a great weekend trip with good old Henry II. The van was well maintained. Andrew, the owner, was very flexible in adjusting to a couple of requests by us. All in all a great experience

We had the most incredible time with Henry. He took us all over France and brought joy to everyone that witnessed us driving around. Such a reliable vehicle and cant wait to hit the road with him again!!

Four of us plus dog hired Henry and an awning for a long weekend to the New forest. Henry was a classic retro VW and we all had a great time enjoying a chug along the motorway and country roads! It was a great experience, had all the basic amenities and quirkiness you would expect from the old style camper. It is compact for a party of four and I would recommend an extra tent or awning for space and storage. Overall great fun and would do it again ! May consider a more modern VW next time for more comfort

We took Henry to France for a week, so we had to rename him Henri! It was truly excellent. Henri was a pleasure to drive, and really fun too! Andrew was helpful throughout, he made it easy to get going quickly and was flexible about when we returned Henri. Id thoroughly recommend hiring a VW Campervan (especially Henri) to anyone, it gives you such freedom. We will be hiring Henri again sometime.

We had a wonderful weekend in Henry. He was really comfortable to sleep in (2 adults up top, 2 kids on the bottom) and once Id got used to the left hand drive, a joy to drive. Andrew was extremely helpful and thorough with al the arrangements. I hope to be hiring Henry again soon.

A fantastic weekend from beginning to end. Andrew could not have been more helpful before booking, on pick up and during our trip. Our two year old had two excellent nights of sleep which made his parents very happy too! Id highly recommend Henry - he was a delight!

Hired Henry for the August bank holiday weekend and took him to the south coast to get some sunshine and rain! Had a great time and Henry was brilliant, very well equipped, def worth having the awning. Highly recommended.

We had a lovely time in Henry. He took us to the Tribe of Doris festival near Rugby... fitted more home comforts in him than you would believe, and was surprisingly nippy when he wanted to be. His guardian Andrew was most accommodating and gave us a very thorough induction into the ways of Henry, including his stylish collection of VW themed camping crockery! If you hire Henry, I do recommend getting the awning as well. Even in good weather it is useful for storage...meaning that you can make the most of Henrys beautifully designed interior without being overwhelmed with clutter... or just take less stuff! Why didnt we think of that?

Performance day at Tribe of Doris!

We had a great time driving Henry around the Malvern Hills. Everything went really well with hiring the Campervan, from booking to dropping it off at the end. Thanks to Andrew for letting us hire it!

Brilliant weekend in Henry II, hired through @camperbugz - London to the New Forest and back! campervan VW retro

Hired Henry for a week long Easter adventure to the Isle of Wright. Our seven year old daughter who doesnt normally like travelling in the car fell in love with Henry, as did we.Andrew was great in helping us hire the van, especially as we asked at quite short notice. The van looks great and is also in excellent condition - it never let us down. It maintains most, if not all the original features but has a new stereo which we appreciated and had satnav, which took away the stress of me getting us lost.Felt great being in Henry and getting waves from all the other VW vans. Also pleasantly surprised about how comfortable the beds were - much better than sleeping in a tent! Would recommend.

We had a great 4 nights away with Henry. A fun holiday!

My husband and I initially booked Henry for a birthday camping weekend. Unfortunately Henry had to go into the garage at the last minute and so we had to cancel our trip but Andrew was extremely helpful and communicative and it couldnt be helped. We rearranged our hire and ended up taking it to a triathlon in the New Forest. I could see Henry as I ran around the course and he gave me a boost! It was so great to be the ones in the cool vw with kids waving to us from other cars and lots of people in the campsite coming up to meet Henry! It did take a while to get used to the left hand drive but the engine was surprisingly powerful and we were easily cruising on the motorway (compared to our old 1980s Talbot!). The top bunk was pretty comfortable even for 2 grown adults and it was warm and cozy. It has lots of good extras like sat nav, phone charger and Bluetooth. Andrew is great with arranging everything with you so you dont need to worry. Id definitely recommend hiring Henry.

Henry is a great campervan with lots of personality and we had a fantastic time with him. Our trip would have been less enjoyable and fun without Henry. He came very well equipped with everything you need for a camping trip stowed in the van’s various cubby holes.Henry’s owner was very responsive to our queries before our hire and he arranged the fitting of a third belt to the rear bench set, which allowed 5 adults to travel in the van! Driving Henry was a great experience. He is more powerful than most campers and showed no mercy taking 5 of us and plenty of luggage up the hills of England!

We had the luck to ride Henry II for an amazing weekend in Dorset. It never disappointed us! Reliable, always there to serve and protect, just brilliant!

I hired Henry for a short weekend break as a surprise for my girlfriends birthday.We had a fantastic time.Andrew, the owner, provided everything (and more) that we needed.He sorted everything out and did a thorough introduction to the van and its features. He even took me on an initial "round the block" drive to get used to how the van drives.Henry has a bit of ongoing minor interior fabrication work. But that all that adds to the charm of driving this unique, quirky and fantastic campervan.

I hired Henry as a surprise for my wifes birthday and we went away for three nights around the south coast. We took along her sister & partner so there were four of us in total. Its was pretty snug but we managed it and all slept well. Theres one double bed in the back and one in the pop-top.The van has a fridge and a cooker which made it easy for us to cook dinner one of the nights and breakfast every morning. Its a real bonus to be able to pull up somewhere nice and make a cup of tea.The van drives quite differently to a modern car or van, it takes a little getting used to but once you do its a joy. In 4th gear its smooth, much quieter than I expected and chuggs along comfortably at 60mph. Andrew, the vans owner is really friendly, he took care to show me all Henrys quirks, gave me tips on driving and even drove me round the block to give me an idea of how it drives. He accommodated a few unusual requests I had in order to keep it a surprise for my wife like letting me pick the van up the night before we left.All in all we had a fantastic time. Its so lovely to be able to be spontaneous and go where you fancy and the van makes that really easy. And as it has so much character its great just being in it and driving it around. Although maybe next time we might just go the two of us!

Absolutely loved staying in Henry ii for a weekend in Brighton. We were complete novices to the campervan world and were surprised how cosy it was despite the weather! Great service from the owner and would thoroughly recommend to others! 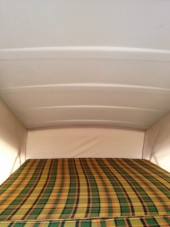 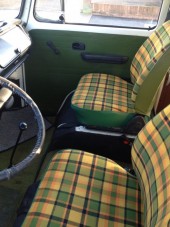 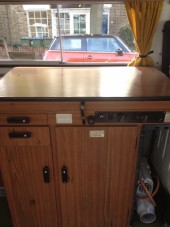