The Channel Islands are an island chain set in the English Channel just off the coast of the French coast, Normandy. The four principal islands are Jersey, Guernsey, Alderney, and Sark. The islands are Crown Dependencies which mean that while they maintain independent governing, the UK government claims responsibility for foreign affairs and defence. The islands fall under separate Bailiwicks (historical feudal divisions) namely the Bailiwick of Guernsey and the Bailiwick of Jersey, and each maintains its laws, taxes and elected bodies. The Bailiwick of Jersey contains the most developed and largest islands plus holds the most attractions while the Bailiwick of Guernsey, comprising of Alderney, Sark, Herm and a group of smaller islands is smaller and more picturesque than Jersey.

Jersey is the biggest island and sits at the southernmost point of the British Islands. Set a mere 14 miles from France the island carries a British-France blend and is a popular holiday destination. Guernsey is best known for its stunning beaches, mouth-watering seafood, rolling hills and jagged cliffs. Alderney takes pride in its traditional lifestyle and remains a natural, unspoilt island despite its 8-mile distance from the coast of France. The tiny island of Sark houses 500 residents, own no cars (except for a tractor-drawn ambulance) and yet holds a three hotels and an estimated 10 B&B’s.

Sofia is a classic 1971 15 window Splitscreen based in Guernsey, Channel Islands. She has a traditional Devon interior from a later bay window which sleeps 2 adults plus has the addition of a Westfalia style child’s bunk across the front seat. There is a hob, grill and fridge. We include bedding, crockery, tables and chairs as part of the rental as we understand many will travel via air and won't want to bring their own camping gear. We also have an awning and roof rack available if you wish to have a longer stay and need additional space.Due to Guernsey law restrictions, she is only available for on Island hire May-September when the campsites are open.

available for on Island hire May-September when the campsites are open. 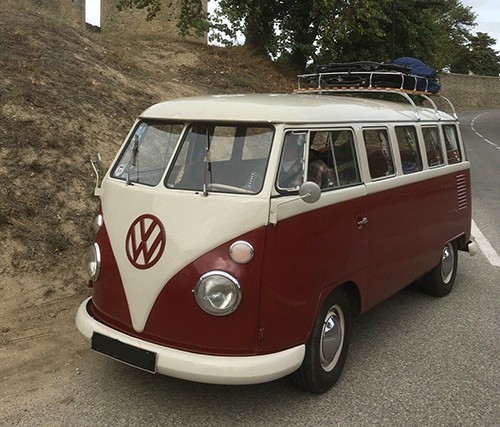 Sofia is a classic 1971 15 window Splitscreen based in Guernsey, Channel Islands. She has a tra