Camperbug does away with salespeople and connects hirers like you directly with private campervan owners across Aberdeen. Send over your travel dates to owners across the city, including Aberdeen, Cove Bay, Dyce, Kingswells and Milltimber.
Nicknamed the Granite City, Aberdeenshire holds the third-largest city in Scotland, while revealing an entirely different side of the country. The region has a lot to offer adventurers, brimming with a heady mix of majestic architecture, beautiful gardens, intriguing historic districts, and a beach! You can use the city as a base to explore the broader area of Aberdeenshire which abounds in castles, whiskey distilleries, and the stunning Cairngorms National Park. Stroll past a stunning waterfall and glistening streams at the tranquil Johnston Gardens. Rumble down to Aberdeen Harbour in your campervan hire, and spring aboard a cruise to observe minke whales, and a variety of dolphin species. Tour the breathtaking St Machar's Cathedral, or rent a wetsuit to enjoy a day of surfing on Aberdeen Beach.

! It is time to start thinking about living life on the road, experiencing freedom, fun, adventure and highland hospitality, enjoy life as it should be. Even if it is just for a week, Highlander will provide an unforgettable experience. We hope you will join with us in our passion for glampervanning and have the holiday of a life time 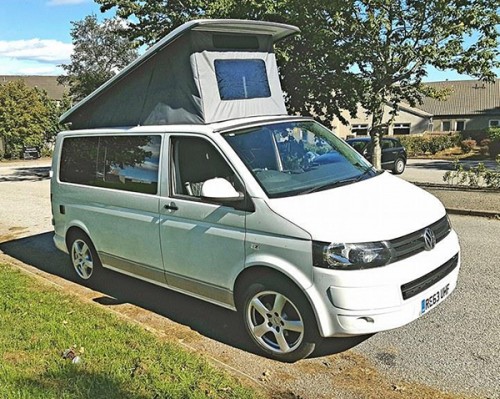 ! It is time to start thinking about living life on the road, experiencing freedom, fun, adven

Hello! Im Winter Violet, and Id love to be part of your next adventure! Im a Nissan Primastar Campervan, and I can sleep 4 and seat 5 wanderers! I come fitted with ample storage sp

2018 VW T6 Campervan. The layout of this camper was developed for those looking for the option of adventure off the beaten track, the key to which being the provision of a flushin

Hello! Im Winter Violet, and Id love to be part of your next adventure! Im a Nissan Primastar Campervan, and I can sleep 4 and seat 5 wanderers! I come fitted with ample storage sp

2018 VW T6 Campervan. The layout of this camper was developed for those looking for the option of adventure off the beaten track, the key to which being the provision of a flushin

We rented Alan's van so we can independently drive around Scotland and in addition it was our first experience in a camper van together as a couple.The place where Alan lives is quite a bit outside Aberdeen, so we used a taxi to go there (and also to come back). If you do the same then expect about 40-50£ extra (in total) for that, plus some time to get there.When we arrived Alan gave us a thorough introduction into the van usage. This was great. Even better is the fact that he wrote an easy-to-read manual with explanatory pictures, so whenever we were stuck or could not remember his introduction, we could simply read it up. If you (the reader) think of hiring a different van and are not experienced with the model, ask whether they hand out such a manual, because otherwise we'd really rather recommend to go with Alan.About the van:The van was great. The model is new, the driving feeling was superb, the car was shining clean when we got it. Like Alan we highly recommend to rent this van for at most two people (or two people and a baby/very young kid) - the van offers 4 places to sleep, but if it rains outside and you're stuck, space is an issue. The sun can be blocked almost 100%, and the setup for that is trivial. The bed on the roof is the comfier one, but it can feel a bit cold. We had no problem, but the material is not wind-proof when the roof is up, so we this is our assumption. The seats in the back can also be turned into a bed, which was not bad, but the lack of a mattress makes it likely to sleep on some parts that will make your sleep a bit uncomfortable. The kitchen is sufficiently equipped and does its job as needed. We had the fridge on all the time, it has no huge drain on the battery life. There is also a heating system which we used every now and then (mainly when we had electricity at a camp site), it was easy to use and kept us warm when needed. The built-in TV we only used once with our USB hard drive - so we say nothing, just mention there is one ;). The toilet is good, but due to lack of space, if you gotta do #2, you probably want your traveling partner to leave the van completely for a while => we didn't make use of that option. Unlike real caravans, the toilet is not in a completely separate room, so we assume that smell is an issue in that case. The only annoying thing for us was the alarm, because we didn't know that well how to turn it off while we were camping. We are confident the next revision of Alan's manual will have an extensive section about that, so I doubt this will be a problem for future renters.All in all we were happy with the car and would rent it again. Unlikely that we visit Scotland again anytime soon, but we can recommend the van.The owner (Alan):Alan was super nice. Like - really. He took all the time needed to answer our questions and to show us all he could think about the van. He gave personal advice on usage, route suggestions, etc.In the last night, the internal lighting system stopped working. We have no idea why. Also we managed to break a small piece that left the "toilet door" unstable. And maybe there was something else, we don't remember, but when we reported/confessed these things to Alan, he said the lighting is not our fault and the broken piece he waved away as standard usage and not a biggie - we got back the full deposit.All in all: also Alan is a great ... "carlord"(?) and we can fully recommend doing business with him.The trip:we took the van from Aberdeen to Inverness, slept there at a camping site, moved further to castle Urquhuart (stopping for some Highland Games on the road) and then turned to the Isle of Skye, where we stayed on a parking lot close to the Old Man of Storr for the night. Next day, after hiking to the old man, we continued around the Isle, came back to the main land and stayed again on a camping site close to Fort Augustus. Last day we steered back towards Aberdeen, but our campsite of choice was not open anymore for us and in the end we ended up in the same camp site of the first night ;)In the aftermath we'd suggest other renters to alternate between visiting campsites and sleeping next to the road. Maybe even 2 nights in a row on the road (not longer to make sure the battery won't discharge). Make sure to have the last night on a camp-site so you can clean out the toilet.Summary: 10/10 from us for this experience.

We were delighted with our recent hire of Murphy - The flexibility of the booking arrangements to suit our dates and times was excellent. The California Ocean van was immaculate and well appointed and easy to use. Storage was more than adequate for 4 people with hill walking gear. Would definitely recommend hiring from here.